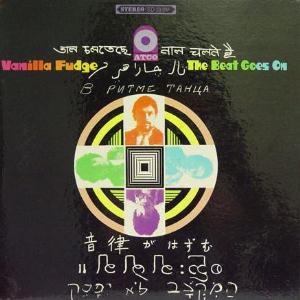 Vanilla Fudge was a quartet on this album with a lineup of keyboards, guitars, bass, drums and vocals.

I reviewed their 1967 self-titled debut album back in October 2011 for ProgArchives and then forgot about the band. Then I bought their drummer Carmine Appice's biography and my interest in this band was rekindled. Their following four albums was purchased and will be reviewed/has been reviewed in this blog.

I have no idea why the band hit the self-destruct button after the release of their popular debut album. Even Carmine Appice did not have a good explanation for this album.

The Beat Goes On is a three quarters of an album with soundbites and extracts from Elvis, Beatles and classical composers pieces of music. Then there is some talking over some music at the end.

I have heard some really bad albums in my life. The Beat Goes On is among the five worst albums I have ever had the displeasure of listening to and reviewing. What the heck was these four boys and their record label thinking ?

Posted by Torodd Fuglesteg at 07:08
Email ThisBlogThis!Share to TwitterShare to FacebookShare to Pinterest