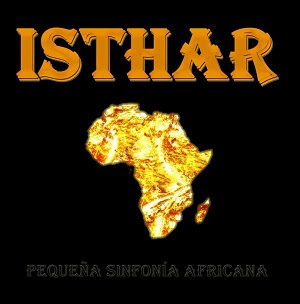 The band is a quintet with a lineup of guitars, bass, drums and Spanish vocals.
The quintet was been helped out by three musicians on drums, clarinet, keyboards and vocals.

I know absolute nothing about this band and this album. But I guess it is something about Africa. And it is a concept album.

The album is over seventy minutes long and I had some hopes for it.

The music is a mix of progressive metal, goth, Spanish rock and Spanish folk rock.

There is a lot of female vocals here and some good male vocals.

The clarinet gives this album some strange vibes of folk music.

That though is the only good about this album. The guitar sound is not good and the music is wishy-washy dull.

This is a decent album but nothing more than that. An album for the local market but not for the world wide market.

Posted by Torodd Fuglesteg at 04:03
Email ThisBlogThis!Share to TwitterShare to FacebookShare to Pinterest