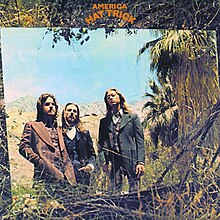 The band was a trio on this album with a lineup of guitars, keyboards and vocals.
Numerous other musicians provided bass, drums, synths, banjo, saxophone, congas, piano and harmonica.

America is a band formed by three US citizens in England before they returned to USA again. They had some hits too.

The music on this album is sailing very close to what Crosby, Stills & Nash gave us. It is in the same mould.

That is not a bad thing as CS&N was a great band.

There is a lot of vocal harmonies on this album and the instruments are supporting the vocals.

The songs are very melodic and nice. There are some good details from the musicians here.

The focus is the vocals though and the songs. And the songs are decent enough. They are lacking a lot in substance seen from the viewpoint of a proghead like myself.

It is still a decent enough album.


Posted by Torodd Fuglesteg at 12:47
Email ThisBlogThis!Share to TwitterShare to FacebookShare to Pinterest