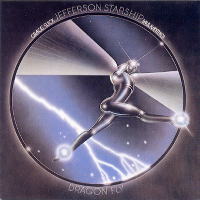 The band was a quintet with a lineup of guitars, electric violin, piano, bass, drums, percussion and vocals.
Marty Balin helped out on one of the tracks.

Yes, this is more or less the same band who released the massive AOR hit "We Built This City". That under the name Starship. But forget about AOR and that song now. As Jefferson Starship, the band released some really interesting albums. Albums well worth checking out.

Both Grace Slick and Paul Kantner was members of Jefferson Starship and pretty much dominated this album. Well, that is a bit unfair towards the rest of the band. Slighly.

The music here is a mix of west coast flower power and psych rock.

The psych rock was far more dominant on this album than on the final Jefferson Airplane albums. Gone was most of the folk rock too.

There is a strong acid psych rock vibe on this album and that is indeed what the music is. Acid and twisted. It is still melodic and very intense. The music is songs orientated.

There is a lot of female and male vocal harmonies on this album. The songs are a bit twisted and has bitter undertones.

Notably is the use of electric violin and that instrument is all over the album.

The songs are really good too with a couple of crackers. Caroline and the opening track Ride The Tiger is the two really very good songs here. A couple of sub-standard tracks drags this album a bit down.

Nevertheless, this is a good album.


Posted by Torodd Fuglesteg at 12:06
Email ThisBlogThis!Share to TwitterShare to FacebookShare to Pinterest