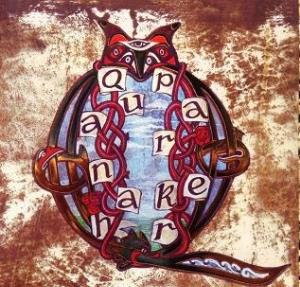 The band was a quintet on this album with a lineup of guitars, bass, drums, keyboards, percussions, flutes and female Italian vocals.

I reviewed their 2012 debut album Quanah! one week ago and rated that as a very good album. I could not wait to hear this album though so I pressed ahead with it a couple of days later. In particular when I heard this album was an Italian vocals album.

Elisabetta Montino still do a great job on the vocals. Even better now as she does her vocals in the more natural mother-tongue. And Italian is a lot better language when it comes to this kind of music than English. Hence my interest in RPI - Italian symphonic prog. One of my passions.

The band has moved a lot in the direction of RPI on this album. They still have these strong jazz influences. But they are not as strong here as on their debut album. These jazz influences has been replaced by symphonic prog.

The first 1/3 of this album is clearly looking back at the debut album works as a bridge between these two albums.

The final 2/3 of this album sees a lot more focus on guitars, keyboards and intricate Italian symphonic prog. This is not easy listening music. But it is very interesting stuff indeed.

Quanah Parker has changed a lot. But the quality is still here and this is another very good album from this Italian band. A band who deserve a lot more attention. Include this band in the list of great new RPI bands.

Posted by Torodd Fuglesteg at 12:01
Email ThisBlogThis!Share to TwitterShare to FacebookShare to Pinterest