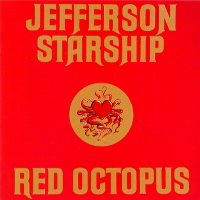 The band was a sextet with a lineup of drums, bass, electric violin, guitars and vocals.
The band was helped by guest musicians providing keyboards, organ, piano and backing vocals.

Most of the Jefferson Airplane setup was now gathered in Jefferson Starship.

The result this time around is an album pretty close to what Jefferson Airplane did.... with an important difference...

The band succeeded in their effort to sound much more commercial stadium rock on this album than on previous Jefferson Airplane/Starship albums.

This album did indeed sell a lot of albums and is their best selling album.

In their attempt to sound as stadium rockers, they also had a country rock sound. Grace Slick delivered the female vocals and the other males did the male vocals.

The music sounds a bit too bland for my liking and it is clearly an album of it's time. There is no real good songs here and this album feels like a step back from their debut album Dragon Fly.

That said, this is not a bad album at all. It is decent enough and an album well worth checking out.

Posted by Torodd Fuglesteg at 05:01
Email ThisBlogThis!Share to TwitterShare to FacebookShare to Pinterest