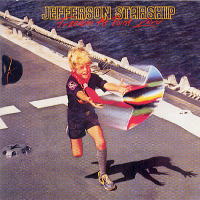 The band was a sextet on this album with a lineup of guitars, bass, organ, keyboards, drums, percussion and vocals.
Two guest musicians provided horns.

Grace Slick and Marty Palin had left the band by now and Mickey Thomas was the new vocalist. Grace Slick returned on the next album, though.

The band was originally called Jefferson Airplane and that was an important band in USA. Their first albums as Jefferson Starship was also pretty important and good albums.

Then the rot set in and the band went more towards stadium rock and AOR.

Freedom At Point Zero is indeed a stadium rock and AOR album. There is nothing left of the good old Jefferson Airplane and indeed Jefferson Starship here.

The migration towards commercial rock was complete on this album.

Which is more than acceptable if the songs are any good. They are not.

The songs on  this forty odd minutes long album are decent enough but just decent. This album marks the end of my interest in this band and I better leave them here.

This is a half-decent album but nothing more than that.


Posted by Torodd Fuglesteg at 01:45
Email ThisBlogThis!Share to TwitterShare to FacebookShare to Pinterest