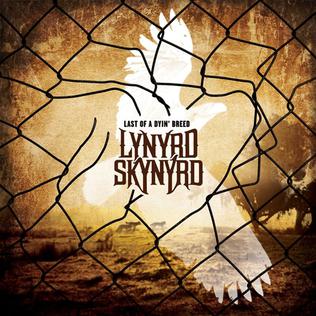 The 14th studio album from these US legends.

The band was a seven piece big band with a lineup of drums, bass, keyboards, guitars and vocals.

Gary Rossington on guitars was the only original member left from their pre-airplane crash lineup... from the albums I have previously reviewed. But another member of the Von Zant family, Johnny Van Zant was now doing the vocals and Rickey Medlocke from Blackfoot had joined the band too.

This is the final album from Lynyrd Skynyrd, we are lead to believe.

Johnny is a very good vocalist in his own right. But he is no Ronnie Van Zant.

On the positive side, the band maintains the Lynyrd Skynyrd sound and this album should not come as a disappointment to those who liked the original band.

The music is in another words fully blooded southern rock. And the songs are pretty good too.

They are uncomplicated and catchy. This is party music indeed and the band and their fans is having a ball on this album.

The result is an album loved by many as it charted pretty high in USA and a good album in my view. If this is their final album, they have left us with their dignity intact and with a very likeable album.

Posted by Torodd Fuglesteg at 02:57
Email ThisBlogThis!Share to TwitterShare to FacebookShare to Pinterest