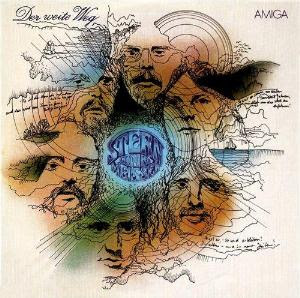 The band was a seven piece big band on this album with a lineup of drums, percussion, bass, guitars, keyboards and vocals.

I had hoped that this band would turn out to be like an like ELP or Omega combo from behind the Iron Curtain. This band is from the old DDR, East Germany.

My disappointment with Der Weite Weg is therefore considerable and crushing.

The German vocals are OK.

What is not OK is the pop-rock here. Braindead folk rock and some really low quality pop-rock too.

This is music for the uneducated masses and even these would bypass this band in search for something far better from the other side of the Iron Curtain. Only DDR nostalgia would make listening to this album.

It is an all out turkey, this album and totally awful.

Avoid at all cost.