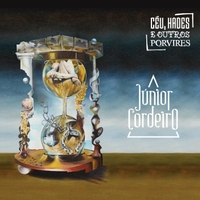 The second album from this Brazilian artist.

I know nothing about this artist/band. But the band has the traditional keyboards, guitars, bass, drums and Portoguese vocals lineup.

The band/artist released the debut album Sonhos, Sertao & Loucura back in 2016. That album went well under my radar.

But someone sent me this album and I am therefore reviewing it.

Junior Cordeiro does a mix of hard rock and melodic prog. The vocals are Portoguese and that gives the band some exotic flavour.

The most remarkable thing about this album is the theft of some well known chord structures from Jimi Hendrix masterpiece Voodoo Chile.

The rest of the album is pretty dull and not interesting at all.

I am afraid to label this as a turkey. It has some decent stuff. But not enough. Check out this album for yourself. I am not impressed......


Posted by Torodd Fuglesteg at 11:48
Email ThisBlogThis!Share to TwitterShare to FacebookShare to Pinterest