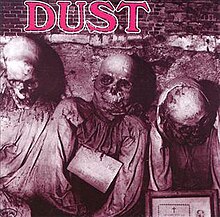 Dust was a trio with a lineup of drums, bass, guitars and vocals.

The band had members from the likes of Ramones and The Yardbirds. Quite a strong band in other words. Unfortunate, they only released two albums.

The band were short-lived but still got a legendary reputation. Not only because Marky Ramone later joined The Ramones. The music too gave this band a lot of attention.

That goes in particular from the heavy rock scene who has now adopted this band as one of their own.

The music is pretty hard and heavy on this album. Proto heavy metal, no less. There is a lot of blues and some psych rock here too. Some Led Zeppelin comparisons is in order here.

The cover is pretty gruesome but it also gives notice that this is not an album for the faint hearted. Those would be scared away by the guitar riffs anyway. Those are very hard indeed.

This forty minutes long album is a decent enough album when you see behind the cover art-work and it's shock effect. It is an album well worth checking out.

Posted by Torodd Fuglesteg at 11:40
Email ThisBlogThis!Share to TwitterShare to FacebookShare to Pinterest