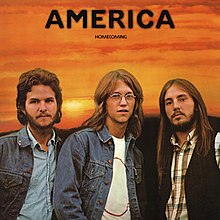 The band was a trio with a lineup of drums, guitars, bass, keyboards and vocals.

Their semi-classic self titled debut album did not really impress me and I was not looking forward to listen to the remaining four America albums.

I very much liked Crosby, Stills & Nash in their heydays. I also liked Neil Young too. Even Crosby, Stills, Nash & Young. But that was years ago.

The funny thing, and perhaps the most natural thing, is that listening to America has made me longing for those above mentioned artists again. At least for some minutes....

Homecoming is in that same direction. The music is more developed and has moved a lot away from the primitive folk rock formula.

There are some really proper music on this album. Some proper west-coast rock. But it is not progressive rock. It still has some great hippie and flower power vibes.

The album opens with perhaps their best song, Ventura Highway. I really like this hippie song which has some great vocals and guitars.

The rest is not of the same class. This album is still a charming album and one I like a lot.

It is indeed a good album and it is regarded as their best album. I approve.


Posted by Torodd Fuglesteg at 11:24
Email ThisBlogThis!Share to TwitterShare to FacebookShare to Pinterest