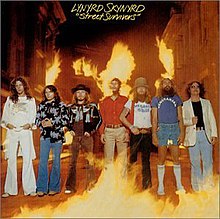 The band was a seven piece big band with a lineup of drums, bass, guitars, keyboards and vocals.

The band had help from a female three piece choir and some guest musicians who provided dobro, bass, drums and male backing vocals.

This was the final album of the original Lynyrd Skynyrd before the awful plane crash who took the lives of the vocalist Ronnie Van Zant and the guitarist Steve Gaines.

The band was never the same again.

The music on this album follows up the music they gave us on the 1976 album Gimme Back My Bullets.

That means southern rock with some rockabilly, soul, gospel and hard rock.

The music is as U S A as you can get. It is also songs based and based on having a good time.

The guitarists are doing a good job and so is Ronnie.

The plane crash robbed us for a great band although some kind of Lynyrd Skynyrd is still around. It is still an acceptable band. But Ronnie perished in the plane crash and we all lost out on something great.

This is still a decent album.

Posted by Torodd Fuglesteg at 11:06
Email ThisBlogThis!Share to TwitterShare to FacebookShare to Pinterest