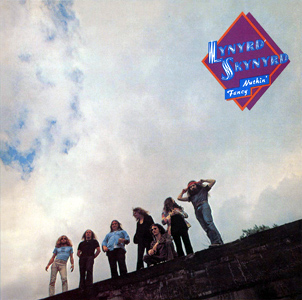 The band was a seven piece big band on this album with a lineup of guitars, keyboards, bass, percussion, drums and vocals.
Four guest musicians provided dobro, harmonica, piano, mandolin and percussion.

I reviewed their first two albums, their first two classic albums, some years ago for # 1 of this blog. I have again decided to review the remaining four albums I got of them.

The band is legends and that even before the horrible airplane crash who wiped out most of the band.

Nuthin' Fancy is one of the albums who adds to their standing and legends status.

Southern rock with some gospel, soul and country'n'western influences is what we get here. There is nothing fancy here.

.... And that is where I am wrong. The music is groovy, melodic, raw and pretty fancy. It is like the voices from the swamps, clubs, towns and farmlands in the deep south.

The songs here are well crafted and well delivered by the band. The classic lineup.

There is a lot to be admired on this album. An album without a killer track. It still has a lot of good music and great vocals from the lost voice of Ronnie Van Zant, who sadly perished in that airplane crash.

This is a really good album and one to check out..... also for progheads.


Posted by Torodd Fuglesteg at 06:02
Email ThisBlogThis!Share to TwitterShare to FacebookShare to Pinterest