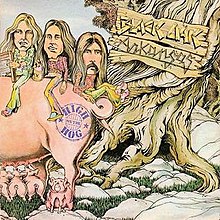 The fourth studio album from this US band.

The band was a sextet on this album with a lineup of guitars, drums, bass and vocals.

The band were a band of their time whose albums may not have survived the test of time. They sounds a bit dated.

They were a part of the scene who also gave us Allman Brothers, Blackfoot, Molly Hatchett and Lynyrd Skynyrd. Southern rock, in other words.

The band started out as heavy influenced by Led Zeppelin before moving to arena rock and southern rock. That with some albums who were not that good.

High On The Hog is the highlight of their career. Their commercial highlight. It even spawned a top 25 Billboard hit.

The music on this thirty-four long album is southern rock with a lot of hillbilly and rock influences. The music is catchy and has a lot of interesting details.

And the music really works here. From the raunchy vocals to the very good guitars. There are even a couple of very good songs here.

This is by far their best album and one to check out.

Posted by Torodd Fuglesteg at 05:38
Email ThisBlogThis!Share to TwitterShare to FacebookShare to Pinterest