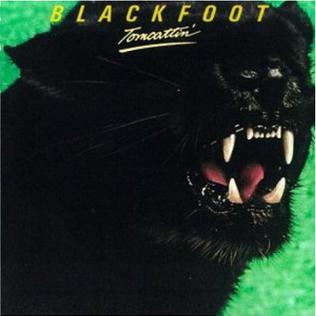 The band was a quartet on this album with a lineup of drums, percussion, bass, keyboards, guitars and vocals.

The band had help from some guest musicians who provided saxophones, harmonica, electric harmonica, percussion, keyboards and vocals.

The band was by now pretty established and their frontman Rickey Medlocke, who today plays in Lynyrd Skynyrd, had got a semi-god status in the scene.

The band was by now pursuing a career in the heavy metal and hard rock genre. That is where we find this album.

The music is somewhere in the crossroads between US hard rock and heavy metal. The music is hard throughout.

There are also some southern rock and stadium rock here. But not as much on previous albums.

The result is a decent enough album. It is not particular interesting and it feels like the band was by now overtaken by the new young guns in the scene.

Those into hard rock should check out this album.

Posted by Torodd Fuglesteg at 00:54
Email ThisBlogThis!Share to TwitterShare to FacebookShare to Pinterest