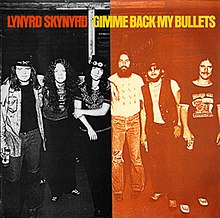 The band was a sextet with a lineup of drums, percussion, bass, guitars, keyboards and vocals.

The band had help from some guest musicians who contributed with dobro, mandolin, harp and female choirs.

The band had settled into this new genre called southern rock. A genre they and The Allman Brothers had created on their own.

The music is a mix of soul, rock, hard rock and country. It is very much an "Born in the USA" genre and in particular, in the southern states of USA.

This album, and most other albums in genre, is the sound of these states.

The band had by now moved away from Led Zeppelin and had gone a bit more pastoral and country than on the previous three albums.

The songs are OK and mid-tempo. There is no fireworks here at all.

The vocals is great and the musicians does their best on some songs which is not their best by far.

This is therefore only a decent album from a band who left us far too soon.

Posted by Torodd Fuglesteg at 12:46
Email ThisBlogThis!Share to TwitterShare to FacebookShare to Pinterest