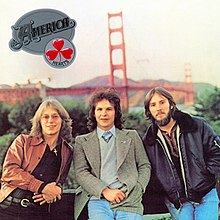 The band was a trio again with a lineup of guitars, keyboards and vocals.
Some guest musicians provided drums, bass, percussion and female vocals.

The quality of their outputs had been good on the last album. Holiday from 1974 is a good album and reviewed here.

The band got their hit singles and that also goes for this album.

There is still a lot of Crosby, Stills, Nash and Young influences in their music. But.....

.... The music has taken a turn down the sloppy pop music path on this album. The music is soooo sweet and pretty much an overdose of sugar.

There are some strings here too just to get the soft pop fans running to the record shop to buy this album. And indeed, they did. It was a big selling album.

The quality of some of the songs is almost good. Then again, there are some cringe worthy moments here too.

The end result is a decent enough album from a band I find good. A band I have really enjoyed and will enjoy again. A band well worth checking out if folk rock is your thing.

Posted by Torodd Fuglesteg at 12:37
Email ThisBlogThis!Share to TwitterShare to FacebookShare to Pinterest