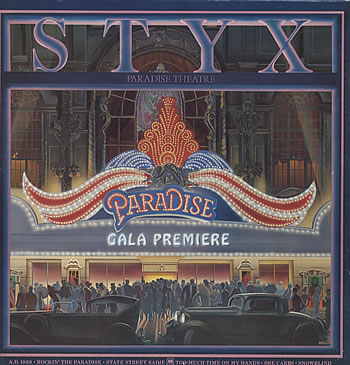 The tenth album from this US band.

Styx had expanded to an 11 piece big band on this album. The expansion was due to adding six horn and woodwind players. Besides of those musicians, Styx was a quintet with a lineup of guitars, keyboards, bass, drums and vocals.

Paradise Theater was a concept album about a theatre in Chicago who closed because TV took over as the main entertainment source for the local population. Styx built a story around this.

Concept albums = prog rock. No ? In this case, it is a big No. The music here is not progressive rock at all.

Take ELO from the late 1970s and add teenybopper pop, AOR, disco and some hard rock. Then you get this album.

The songs are all catchy. Some of the stuff is even emotional ballads like. Most of this album is stucked in a time warp, never to deserve a listen in 2017. Well, that was a bit harsh. But you get the 1981 sound loud and clear here.

The music is simple and not really that interesting. The horns and the electronic robot stuff is not good. There is not a single great track here either. The end result is only a decent album which does not interest me. Hence my rating.

Posted by Torodd Fuglesteg at 00:24
Email ThisBlogThis!Share to TwitterShare to FacebookShare to Pinterest