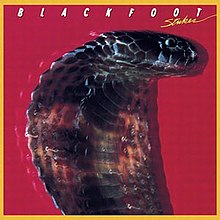 The third studio album from this US band.

The band was a quintet with a lineup of drums, percussion, bass, guitars, keyboards and vocals.

The band had some help from harmonica, keyboards and guest vocalists.

This band continued on their southern rock path towards a respectable position in the US musical landscape. Their image as native americans played a role in promoting this band.

This album sold reasonable well and has reached more than one million sold copies as we speak.

That is not undeserved at all.

This album offers up some medium hard rocking southern rock with some arena rock influences. There are also some good vocals here and some good details.

The emphasis is on pretty commercial southern rock. But the band also delivered good rock which has survived the test of time.

It is not a good album but some of the songs are somewhere just below that area.

Check out this album if authentic southern rock and US rock is your thing.

Posted by Torodd Fuglesteg at 12:11
Email ThisBlogThis!Share to TwitterShare to FacebookShare to Pinterest