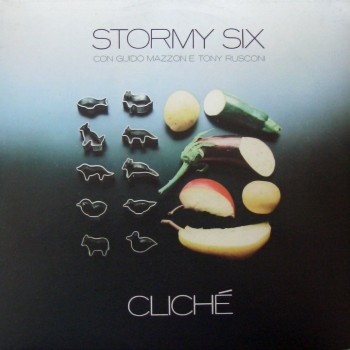 The band was a seven piece big band with a lineup of balalaika, mandolin, violin, bass, sax, drums and Italian vocals.

This album is actually two albums, Cliche and Pinocchio Bazar, moulded together into one album. A sixty-seven minutes long album. The reason for this merge is that the album sounds very similar.

Which they really do. The merged album is the start of their RIO/Avant-garde era. They were indeed one of the five bands on the first ever Rock In Opposition festival together with Henry Cow, Samla Mammas Manna, Univers Zero and Etron Fou Leloublan.

The music here is acoustic with no electric inputs. There is not much vocals here either. The music is also what I would call chamber rock. There are some disagreements if this is a chamber rock album or not. In my opinion, it is.

The music is pretty dark and moody throughout. The violins drags the mood down a lot. There are some sporadic dark skies in their music too.

For an untrained ear, it is not easy to detect any good melodies here. But there is a lot of them. Ditto for interesting details too. As with all RIO albums, this album really demands a lot from the listener. But the rewards are here to be found.

Cliche is not a great album as the band is trying to find their feet after the swap over from folk-rock to RIO. But it is still a good album and one to check out.

Posted by Torodd Fuglesteg at 03:22
Email ThisBlogThis!Share to TwitterShare to FacebookShare to Pinterest