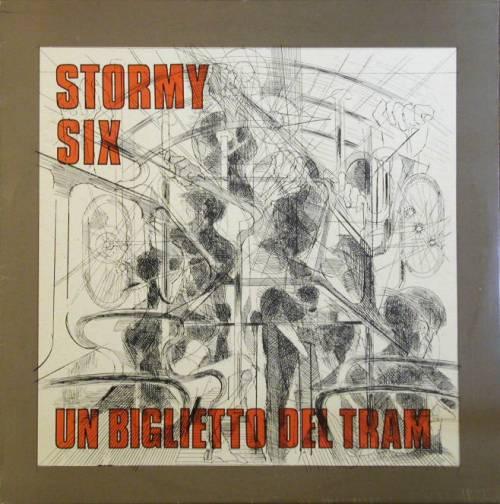 The band was a sextet on this album with a lineup of violin, sax, guitars, balalaika, mandolin, bass, drums and Italian vocals.

I managed to get a copy of their Original Album Series which contains their five final albums. That box exludes their three first albums which is not regarded as that good. Hence, I will review all five albums/has reviewed all five albums in this blog.

Stormy Six was one of the original bands in the RIO movement together with Henry Cow, Samla Mammas Manna, Univers Zero and Etron Fou Leloublan. All bands to be reviewed in this blog.

Stormy Six started out as a folk rock band before turning into a RIO band. Un Biglietto Del Tram is supposed to be a folk rock album. And indeed it is.

But it is not entirely a folk rock album. There is some subtle avant-garde themes in this album. This album is not a straight forward forty odd minutes long folk-rock album.

The vocals is a bit harsh and loud. The album is wholly acoustic and is sometimes going in the direction of chamber baroque RIO. The violins is at times distorted too.

The end result is a reasonable melodic album. Still, the album is sailing close to avant-garde and RIO territory. It is a promising, good album and well worth checking out.

Posted by Torodd Fuglesteg at 05:56
Email ThisBlogThis!Share to TwitterShare to FacebookShare to Pinterest