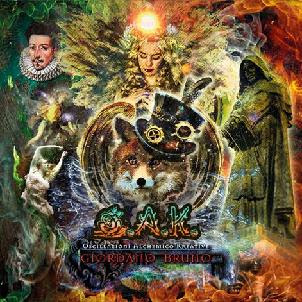 The debut album from this band/project.

The band's full name is Oscillazioni Alchemicio Kreative. That means creative alchemical oscillations. The project's main man and probably songwriter too is Jerry Cutillo.
He got help from the likes of David Jackson, Sonia Kristine, Richard Sinclair, Jenny Sorrenti, Maart Allcock and members from Goblin. Just to mention the most known ones.

This is another all-stars project and album. I am not a big fan of those projects as they tends to be all over the place and slightly unfocused.

We get a mix of English and Italian male and female vocals on this seventy odd minutes long album.

We also get a mix of RPI, symphonic prog, a bit musicals songs, a bit more classical music like songs and some poppy tunes.

This may be a concept album. It probably is. It feels like it as the music is a bit all over the place. A bit of a rock opera, too.