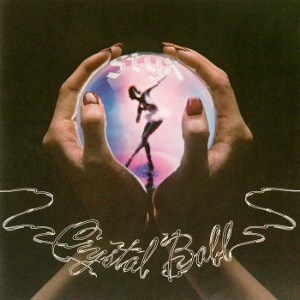 The band was a five piece big band with a lineup of guitars, keyboards, bass, drums, synths and vocals.

This is also the first album with the ultimate, so I have been told, Styx vocalist. His name is off course Tommy Shaw.

After struggling with getting some recognition and album sales, Styx were starting to hit the jackpot and their stride.

Styx was a strange band, viewed with European glasses and eyes. Or not to mention; an European mindset. The sound on this album is very American. That means big and brash. To a large extent, Styx were a poor man's Kansas. Not at least on their first six albums. Sometimes, they also has got something from Eagles.

The music here is pomp prog with a lot of of hard rock included. The choruses is very much in the teenybopper pop mould.

This half an hour long album has some really good songs. The title track is one of them. The Old Man and Mademoiselle is two other tracks. There is hardly any bad track on this album. The choruses are a bit cheesy. But the band delivers the goods on this album. And I am known to like a piece of cheese now and then. Styx and Crystal Ball is my kind of cheese.