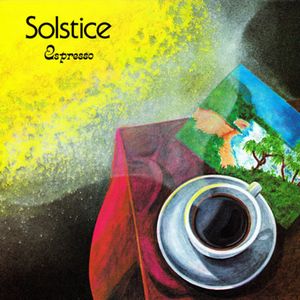 The second and final album from this Canadian band.

The band was a five man big band with a lineup of clarinet, bass, percussions, drums, guitars, electric piano, keyboards, synths and organ.

The band was one of the more forgotten bands from the Quebec scene. A scene giving us Harmonium, Maneige and many other bands. It is also one of my favourite scenes as I am collecting everything I can lay my hands on from that scene.

That includes also the 1978 debut album Mirage from this band. You will find my review here.  I was not overwhelmed by the quality of that album.

Three years on and the band is continuing down the same path again. That means jazz/fusion in the Weather Report and Gong vein.

There is a lot of Pierre Moerlen's Gong influenced fusion here. Both Solstice and that incarnation of Gong were around the scene at the same time. Solstice is clearly influenced by them.... Gong.

Both the clarinet and the piano is doing most of the leads and solos here. The clarinet is what sticks to mind here. The guitars is much more playing a supporting role. To a large extent, the same goes for the keyboards too.

The end result is this thirty-five minutes long album. An album which does not offer the most interesting jazz/fusion around. The music is a bit light-weight and a bit lacking in substance. The end result is another album somewhere between decent and good. I am not overly excited by this band. But check out both albums.


Posted by Torodd Fuglesteg at 12:20
Email ThisBlogThis!Share to TwitterShare to FacebookShare to Pinterest