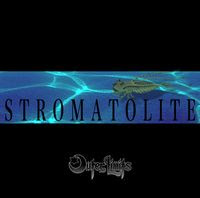 The fifth and final album from this Japanese band.

Outer Limits was a quintet on this album with a lineup of violin, grandstick, bass, cello, viola, keyboards, drums, pipeorgan, mellotron, guitar and vocals.

I have reviewed their albums during the last two months and that has been a pleasure. A bit difficult though as this band is not a run of the mill band. Neither is their music.

Japanese progressive rock is not the most easy music on the ear. In particular if you are used to European and American music. But that makes Japanese prog rock such an interesting genre and such an interesting scene..... and country. Japan has most certainly added a lot of colour to our lives during my lifetime.. 50 years, that is.

Stromatolite sees the band from a more accessible side. That without becoming commercial, whatsoever. The DNA of the band is still here. But the music is a lot better.

The music on  Stromatolite is a mix of symphonic prog (ELP), folk rock, avant-garde rock and fusion. The music is eclectic as per usual from this band. But the first half of this fifty-two minutes long album sees two very simple songs. Lullaby is one of them and it is an odd song for Outer Limits to include on an album. I am almost shocked.

The final half of this album takes the band into a much more ELP like landscape with bombastic symphonic prog. And there is also a good song here.

This is in my view their best album and one that I really cherish. It is almost a great album... but not quite. I really rate this band very highly. They are perhaps the best Japanese band ever.
This album is a very good album, indeed.

Posted by Torodd Fuglesteg at 05:16
Email ThisBlogThis!Share to TwitterShare to FacebookShare to Pinterest