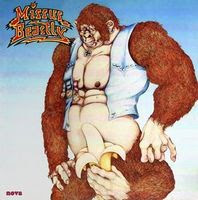 The band was a quintet with a lineup of flute, sax, bass, drums, keyboards and guitars.

This band released their debut album back in 1970 with a different lineup of and setup. The music was also totally different. I have yet to find that album. That band broke up shortly afterwards.
Their drummer Lutz Oldemeier got together a new band again with a different set of ideas and music. Hence this album and some more albums during the 1970s. I got another one of their album too.

The band anno 1974 was a pure jazz and fusion band. They have been compared to Embryo a lot. I am not sure as I have yet to come around to review the Embryo albums. It is on my to-do list.

The jazz and fusion here has a lot of mystic rhythms and a great deal of African music. The music also has a lot of classic jazz and some rock too. Fusion in other words.

The flutes and saxophones is pretty much in the foreground here and fans of saxophones should really check out this album. The album and the saxophones solos is really groovy too. My feet is drumming away during most of this album.

Germany had a very good fusion scene in the 1970s. Although this band did not really make it big, this almost forty minutes long album is really good and very enjoyable. This is one to really enjoy.

Posted by Torodd Fuglesteg at 06:50
Email ThisBlogThis!Share to TwitterShare to FacebookShare to Pinterest