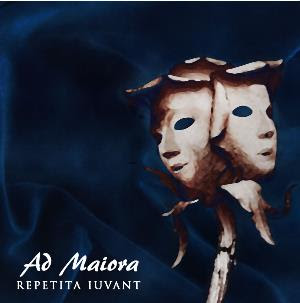 Ad Maiora is a quintet with a lineup of bass, drums, keyboards, guitars and vocals. A mix of English and Italian vocals, that is.

I have yet to hear or to get their 2013 self-titled debut album. So I cannot say anything about their devolpment either.

Neither did I review this album when I should have reviewed it.... in 2016. I had a listen, but decided to spend my time on other albums instead. I chickened out. Big mistake.

This album is by no means a normal Rock Progressive Italiano, RPI, album. It is really everywhere in the progressive rock landscape. From heavy prog to bombastic symphonic prog to more eclectic prog to RPI and some fusion too. The scope here is massive.

This one hour album gives us everything, including a Procol Harum cover song. And it feels too much. Too many genres in one hour. Too much confusion and too much of a compilation album.

That said, the music is good. The musicians does a great job and the sound is good. But as I said, in too many genres at the same album. In the same good album which would had been a lot better if the band did not try to be everything to far too many people.


Posted by Torodd Fuglesteg at 03:51
Email ThisBlogThis!Share to TwitterShare to FacebookShare to Pinterest