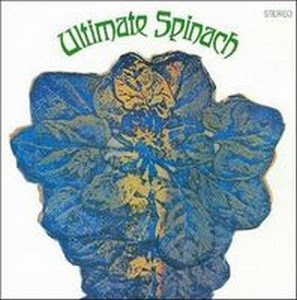 Ultimate Spinach was a sextet with a lineup of guitars, bass, drums, sitar, flutes, harmonica, vibraphone, keyboards and vocals. Both male and female vocals.

The band, who was the brainchild of Ian Bruce-Douglas, released three albums between 1968 and 1969. I will review all three albums this month/you will find my reviews of their three albums somewhere else in this blog.

Ultimate Spinach was from Boston on the east-coast of USA. They sounds like a west-coast band though. But they were very proud of Boston and being an east-coast band. I better not provoke the band into an argument here....

.... but obvious references are Jefferson Airplane. Which means the band was a psychedelic rock band. There is also a lot of The Beatles in their music. There is lot of beat here and some harder rock.

The female vocalist Barbara Hudson, who together with Ian Bruce-Douglas was the only person featuring on all their three albums, sounds like Grace Slick too.

Nevertheless, this band's crossover between The Beatles and Jefferson Airplane gives this band and album it's own identity. The spaced out guitars and sitar also gives this album an edge.

There is no wonder why this band is regarded as one of the original psych rock bands. Fifty years later, this album still throws a punch. The quality is somewhere between decent and good. Check out this album if psych rock is your thing.

2.5 points
Posted by Torodd Fuglesteg at 03:35
Email ThisBlogThis!Share to TwitterShare to FacebookShare to Pinterest