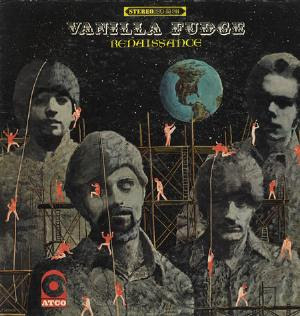 The band was a quartet on this album with a lineup of guitars, organs, bass, drums and vocals.

The band returned again after their experiemental psychedelia fiasco album The Beat Goes On. An album which is so bad that it easily goes into the top 5 of the worst albums I have ever heard. A view I share with the drummer Carmine Appice according to his highly entertaining biography. Read my review here.

So the band needed to raise their game again and start to play proper rock as their did on their 1967 self-titled debut album.

So we are again back to the west coast hard rocking psychedelia rock. The music is hard rocking with a lot of psychedelic rhythms and melodies. Vanilla Fudge was never a run of the mill hard rock band. They did it their way.

There are still some weird stuff on this album as the band were still dipping their toes into some avant-garde stuff. But that just makes this album more insteresting.

There is also a lot of soul and some blues on this album. The guitars and organs really rocks out. Ditto for the drums. The vocals from Mark Stein is both soulful and psychedelic.

This is a good album and well worth checking out.


Posted by Torodd Fuglesteg at 02:28
Email ThisBlogThis!Share to TwitterShare to FacebookShare to Pinterest