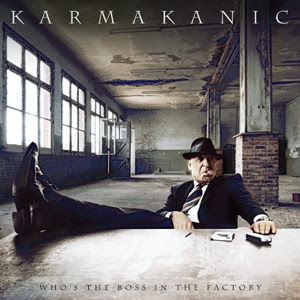 The third album from this Swedish band.

This band is the super-bassist Jonas Reingold's band and he had help from four other regular band members here on this album. The lineup was bass, drums, keyboards, percussion, guitars and vocals.

Lots of guest musicians added their voices and sounds too. Most notable guests are Theo Travis, Roine Stolt, Andy Tillison and Tomas Bodin. The Tangent and The Flower Kings is the backbone of both this band and this album.

Karmakanic is a band who has never really impressed me. Their music has until this album been a funky pop-rock version of The Flower Kings and Swedish symphonic prog. A sure way of turning me off this band and their albums.

Who's The Boss In The Factory is a different kettle of fish, though. The band has moved a lot closer towards both The Tangent and The Flower Kings in both their sound and in their music.

The opening track Send A Message From The Heart is twenty minutes long and is a proof that this is a Karmakanic album well worth checking out to a sceptic like myself. So I am listening...... A lot.

The opening track and most other tracks on this fifty-five minutes long album is bombastic and throws hand-grenades in all directions. But this album ends with the two pieces, seven minutes long suite Eternally. A pretty pastoral suite and a contrast to the rest of this symphonic, bombastic album.

The end result is a very good album well worth checking out as it is one of the better Swedish symphonic prog albums out there. I never thought I would say that about a Karmakanic album......