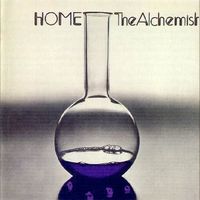 The third and final album from this British band.

Home was a quartet with a lineup of steel guitar, piano, bass, drums, guitars and vocals.

Home's two first albums was a mixed bag to say at least. They were folk rock with US country influences and not much else. You can read my reviews here and here.

The band changed direction on The Alchemist. Gone is country and folk rock. In comes progressive rock. But this was sadly their final album as the bassist Cliff Williams joined AC/DC and the three others became respectable studio musicians and members of other less known bands

Take old style UK symphonic prog rock from the likes of Cressida and Barclay James Harvest. Add some Wally and ELO too and a hint of Yes and The Beatles. That is when you get this album. But the band is still retaining some of their identity from their first two albums.

The music surprisingly complex throughout. I also believe this is a concept album too. There are a lot of strings like keyboards here and the sound is pretty big.

There is no denying that this forty odd minutes long album surprises me. And there is those who regard this album as a hidden gem in the prog rock scene. I am not disagreeing..... This is indeed a good album.


Posted by Torodd Fuglesteg at 08:03
Email ThisBlogThis!Share to TwitterShare to FacebookShare to Pinterest