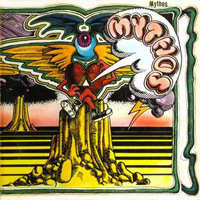 The band was a trio on this album with a lineup of guitars, bass, synths, drums, sitar, flutes, percussions and English vocals.

Mythos has released eight albums. The last one in 2015 and they may even be alive and well today as far as I know. I have got four of their early albums and will voice my opinions about them in the coming weeks/you can find other Mythos reviews somewhere else in this blog.

Mythos were and probably still is a krautrock band. The music here is very much, 100 % proof krautrock.

Mythos krautrock were on the raga-rock end of the spectrum. There is a lot of tabla and sitar here with some dreamy vocals too. There is also a lot of guitars and synths here too. But the Indian mysticism is very obvious on this album.

The music is pretty much cosmic too with ethereal flutes and guitars too in this music.

This is a forty minutes long debut album with trials and errors. The art of songwriting and making some above average good tunes is missing here. But this album still gives an indication about their intentions and is an acceptable debut album. Check it out.


Posted by Torodd Fuglesteg at 11:19
Email ThisBlogThis!Share to TwitterShare to FacebookShare to Pinterest