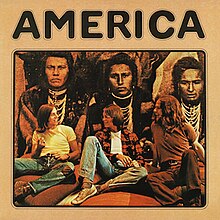 America was a trio on this album with a lineup of drums, bass, percussions, guitars, piano and vocals.

The band was three US musicians in England who came together and formed this band. In effect, this band is and English band. The sound is 100 % Americana and has no influences from England.

I have chosen to review the version of the album who also include their smash hit A Horse With No Name as this was included in the 5 CDs Original Albums my five reviews of their albums in the coming weeks are based on.

I have always, from I was ten years old, wanted to hear their albums as the artwork made a big impression on me. So the chance has finally arrived....

There is no doubts that America is sailing very close to being a Crosby, Stills, Nash & Young copycat. That is the acoustic version of C,S,N & Y i refer to.

America is a fully acoustic album based on folk rock and the trio format. The two hit singles are really good. The rest of the album is not particular interesting as it is pretty primitive folk rock with lots of vocals and not much else. I am not won over.


Posted by Torodd Fuglesteg at 00:02
Email ThisBlogThis!Share to TwitterShare to FacebookShare to Pinterest