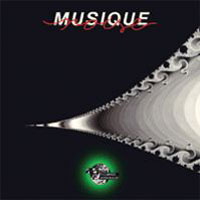 The band was an eight piece band with a lineup of saxophones, bass, drums, guitars, synths, piano, percussions and vocals. Both male and female vocals. French vocals.

Magma is a band who has inspired some bands. Not many enough bands, in my view. But still some bands and we should be grateful for those who plays zeuhl.

You get the soprano vocals and some demented male vocals here. You also get the pulsating bass. A bass which is not as harsh and atonal as in zeuhl.

The zeuhl here is very upbeat and happy. Not dark and demented as the zeuhl the masters Magma did. There are also some avant-garde nodding and ambient music here in the middle of the album before it return to some happy chappy zeuhl.

The album is almost seventy-five minutes long and pretty obscure. It is not really a good album and the zeuhl is a bit toothless. It is like going to war with guns who are only firing blanks.

The end result is a decent to good album which does not really makes the grade, I am afraid.

Posted by Torodd Fuglesteg at 04:45
Email ThisBlogThis!Share to TwitterShare to FacebookShare to Pinterest