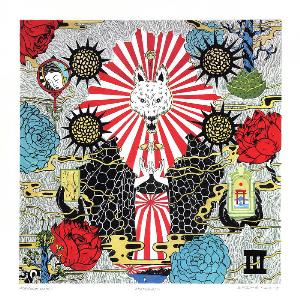 Corima is a quintet on this album with a lineup of saxophone, violin, keyboards, synths, organs, glockenspiel, bass, drums, guitars and vocals.

Corima is something as rare as a zeuhl band. And a zeuhl band in the more Japanese tradition. Koenjihyakkei is a good reference for their Quietzalcoatl album. Corima has also blown away those of my friends who has attended one of Corima's gigs.

So I was a bit miffed when I started to listen to this album. The first half of this album is jazz-zeuhl in the vein of Zao. Very good jazz, though. This is the kind of jazz that plays on all my heartstrings.... well, most of them. And it is a bit zeuhl too because the jazz is hyper-active and dynamic. That opus is called Tsukutomi I-III.

That track glides over into the title track Amaterasu I - VI. And we are really back into classic zeuhl territory again. There is a lot of violins here as there was a lot of violins on Tsukutomi I-III too. The bass, organ, drums and glockenspiel is working like maniacs and the vocals too comes in as instruments. This is zeuhl and do we love it ? Oh, yeah.....

This album is forty-nine minutes long and this great album serves to confirm that Corima is one of the best progressive rock bands around right now. It also proves that there is life in zeuhl too.

Torodd Fuglesteg
This blog is about the joy of music, free of any rules and genres restrictions which has blighted my work for other publications. I have no other pretences with this blog other than listening to music and then voice an opinion. Contact details: toroddattoroddfuglestegdotcom