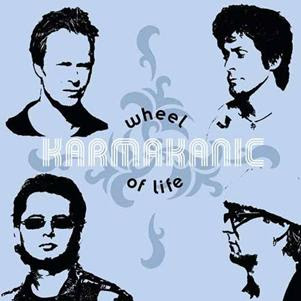 Karmakanic was a quartet on this album with a lineup of guitars, bass, drums, keyboards and English vocals. They also had help from the likes of Roine Stolt and Tomas Bodin.

Karmakanic is really Jonas Reingold's band and hobby project when he was/is not playing with The Tangent and The Flower Kings.

I was not that impressed with their 2002 debut album Entering The Spectra. An album all over the place with not much quality.

The band is still all over the place. There is obviously a desire to not make this band into a The Flower Kings clone. In this, they have succeeded.

So what we get here is a lot of jazz, rock, funk, world music and some Scandinavian symphonic prog. Jonas Reingold gives himself a lot of space to shine here. In particular on the eight minutes long instrumental fusion pastishe.

The Swedish symphonic prog here are reasonable OK. These songs are not particular good though.

This one hour long album is too unfocused and does not have much good stuff. This is another hit/miss album. An album somewhere between decent and good. I am not impressed.